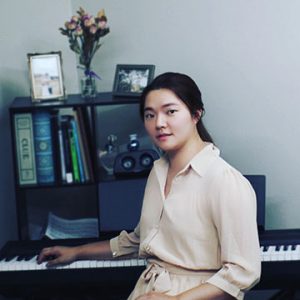 Before pursuing her collegiate studies, she began her piano journey at the age of three and has performed in solo and chamber music concerts througout the U.S. as well as internationally in Korea and Canada. Ms. Ahn has performed with Northwest International Chamber Orchestra at Meany Hall at the University of Washington and the Pilgrim Orchestra at Bell Performing Arts Center in Vancouver, Canada She has also participated in masterclasses with pianist Martin Canin and the Ying Quartet.

In addition to these performances, she has also participated in many competitions. She won first place in the Eastshore Solo and Ensemble Festival, Eastside Chapter Piano Scholarship Competition, MTNA Northwest Division Senior Piano Competition, WSMTA Outstanding Artist Competition, and th Korea Times Young Artist Competition. While at Eastman, she and her trio also advanced to the quarter finals of Fischoff National Chamber Music Competition.

She is a warm-hearted teacher who loves sharing her passion for piano. She wants her students to enjoy playing piano and to grow in their love of music. In her spare time, she enjoys arranging pop songs or other favorites for students so they can enjoy playing a well rounded cirriculum of music, ranging from classical to popular selections. Ms. Ahn is also bilingual and can give lessons in English and Korean.